Twitter has now launched Promoted Tweets and Account Promotion for SMB’s /SME’s (Small and medium-sized businesses). After Twitter entered the stock market it was clear it would not be long until they started to monetise more areas of the business. 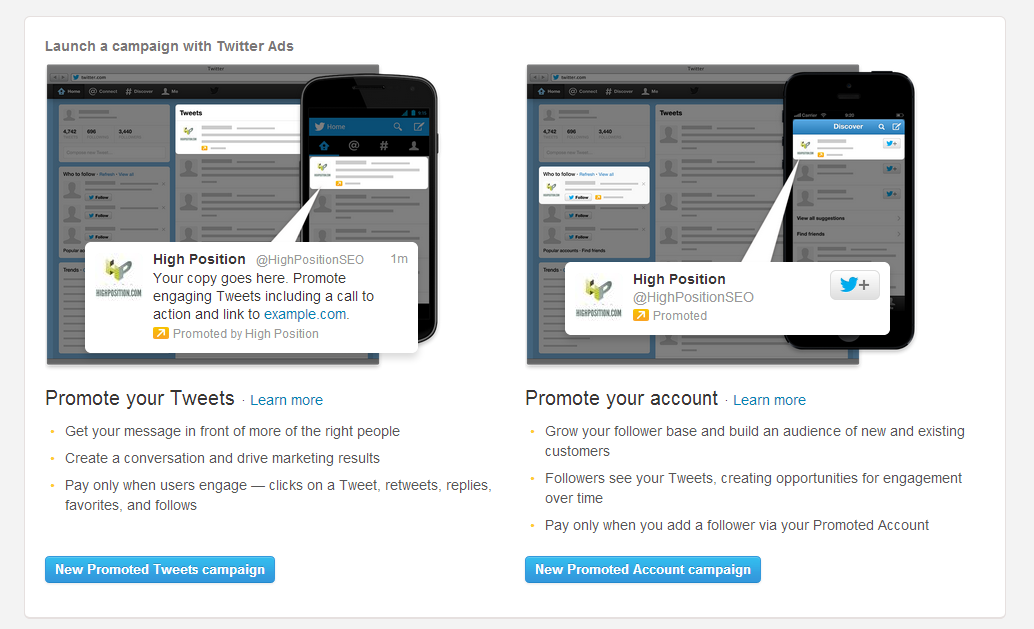 Social Media is an important part of any online strategy and using promoted tweets can help you to reach the right people. With Promoted Tweets you will only pay for users that engage with the ads (click on the tweet, retweet, reply, favourite or follow).

Reaching users via social media helps you to generate interest in your services and potentially drive traffic to your site, without having to worry about where you currently rank on Google.

How Much will Promoted Tweets Cost?

Promoted Tweets are charged using a CPC model similar to Google Adwords and you can set a daily budget. Twitter are offering full account management for users that spend over £5,000 per month, although there are tutorials available and High Position will be blogging updates on how to manage your own account.

Engaging with a new Generation

Twitter is no longer a platform that is just used by celebrities to tweet about what they have had for breakfast. Twitter has grown-up and is being used by like-minded individuals to communicate on topics they share an interest in, whether it is a new car, news stories or that awful singing competition that is shown on a Saturday evening, people are using Twitter regularly. It is also important to take into consideration that the 25-44 year olds who make up more than half of social media users are the people you may want to sell your next vehicle, product or service to.