For those who haven’t seen this yet IFTTT.com is a neat website that is built on a fairly basic idea but has some huge potential. The principle quite simply is: If This, Then That. This is a very straightforward platform which lets you create actions based on trigger events without any knowledge of coding or anything more complicated than filling in a few forms - it’s only really limited by your imagination and cunning. For example IF there is a new job post on Craigslist THEN email to your Gmail account - simple!

Recently there has been some more additions to the service that have caught my eye in regards to guest blogging and blogger outreach, so I thought I’d return to it and see what I could come up with.

So it’s no secret that I’m a big advocate of Evernote, it’s a product which has really enhanced what I can do whilst writing and when I saw that it can be combined with IFTTT I realised that I could create something which’d prove even more useful. What you’ll find below are my top four recipes I’ve created for guest posting (mostly using Evernote) and I thought I’d share them with you so you could put them to good use too.

All these recipes will require access to Google Alerts, or Gmail and Evernote and I hope will highlight just how easy it can be to get a whole host of targeted data pulled into one place for quick reference later. For ease of use I’m making the assumption that you’re signed into your Google, Evernote and IFTTT accounts as well as activated them all - it’s a piece of cake, don’t worry IFTTT will guide you through that stage if needed. What’s more all of these can be used for free, so there’s no excuse not to, right?

All Your Guest Posting Content Ideas in One Place

This is my favourite and possibly the most simple of my recipes, I’ve only been using this a short while but already it’s helped slash the amount of time I take thinking up relevant content ideas. Not only speeding up the process it also helps produce much higher quality and inspiring content which is much more “zeitgeisty” and therefore more likely to get hosted on another blog.

Some of you may be wondering why I’ve bothered going to the trouble to have all these feed items added to Evernote rather than just use an RSS reader to store them. As useful as the Google alerts process may be without these extra steps, the cloud storage options and tagging means that I can easily organise all my notes (and you’ll find that with the other items posting to Evernote too, it keeps everything stored in the same place).

This is very similar to the previous recipe  but instead of pulling an entire feed you’ve created using Google alerts, it lets you just pick certain content from an existing feed and then write it to a new note.

At the moment the main use I have for this is to consolidate all the Daily Search Forum Recaps from Search Engine Roundtable, I’ve just added “Daily Search Forum Recap:” in each alert and then added the relevant month to the end. By using separate recipes for this I can have them posted to different notes in Evernote which are tagged accordingly. 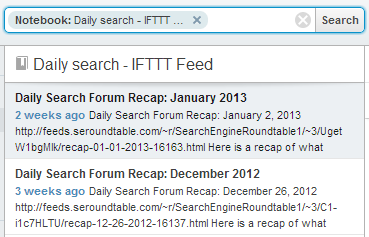 If you’re anything like me you’ll have a ton of different mailing list items which get lost amongst all your other daily emails and whatnot. Considering how awesome some of the mailing lists available are out there, it’d be a total shame if they didn’t get right. IFTTT has a great feature that allows you to have specific email trigger from a Gmail account and that is at the centre of this recipe.

I’ve found that this is a really great way of ensuring that I’ve always got the mailing list resources to hand and again, if you’ve used the tags effectively you can make referencing later really easy.

This final note works almost exactly the same as #1 here, except we’re now using Google alerts to track the new guest posting opportunities as Big G finds them and IFTTT to store them in Evernote for later.

Even though this kind of alert/search query is nothing new, from what I’ve seen so far this type of alert often unearths opportunities in places you might not have previously considered. The alert I’ve set up here is based on a very basic alert which contains one “OR” rule, however there are more advanced combinations you can use - so go nuts*.

*Not too nuts though, the more advanced queries in Google Alerts don’t appear to return results in the same fashion (i.e. work properly) as they would if you just search it through Google. 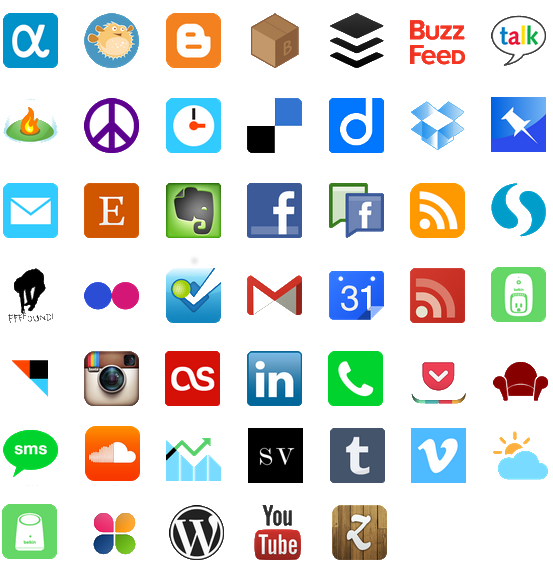 So here are some of the most noteworthy recipes I’ve created on IFTTT so far, but I’d strongly advise you to experiment with the different combinations yourself and browse those which other users have already uploaded. At the moment the site is still fairly young, although the different services which are compatible are growing all the time. With each new one added there’s a new opportunity for SEOs/marketeers to get stuck in, so take a look around and if you create something cool, drop back in and let us know!