About a month ago I published some research into the Google EMD update and it’s effect on exact and partial-match domains in the UK SERPs. If you have’t read that yet then I suggest you pop over there first for some background. It’s OK, I’ll wait.

One of the questions that got asked more than once after the data was made public was how the update had affected hyphenated domains in general and not just EMD/PMDs. Anecdotally I had noticed various sites dropping rankings around the same time so it was definitely something I wanted to investigate. Luckily - I finally had some spare time on Friday to run some data.

I used the same dataset as I used in the previous research - a random slice of 5000 keywords that we track within our Floodlight platform. This time I was looking for any result that met the following criteria:

I wanted to make sure that nothing targeted within the EMD update should have had any impact on these numbers, hence the negative match on EMD/PMD domains. Essentially I wanted to just look at domains that had no major keyword connection but happened to be hyphenated. I also split them into two buckets; domains with a single hyphen and domains with multiple hyphens.

As I said in my last post, I’ve tried to be as specific with the timeframes as possible to try and pinpoint the EMD update only but it’s worth mentioning again that there were Panda and Penguin refreshes around this time too. It’s no stretch to assume that hyphenated domains are more likely to be low quality and therefore could also be the type of sites being targeted by the black and white animals so there is nothing 100% conclusive here.

To Hyphen or not to Hyphen?

So as I mentioned above, I split the data into two distinct buckets - single hyphens and multi hyphens. The results are fairly interesting once we start digging deeper although on a top level seem fairly bland. Here’s the average ranking position of the two buckets before and after the update: 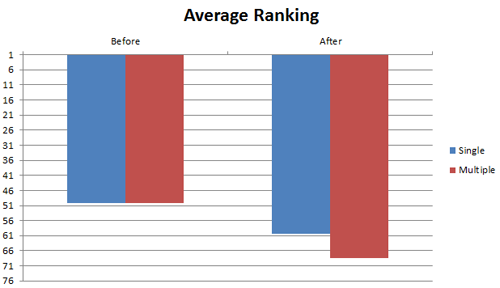 Starting positions are very similar - #50.2 for single hyphens and #50.3 for multiple-hyphens, being slap bang in the middle of our 1-100 rankings suggests very little positional bias before the update. Afterwards however is a different story with drops to #60.4 (20%) and #68.5 (36%) respectively.

As in my previous post I then split my two main buckets into 10 smaller buckets based on starting position of the ranking URL. Here is what the drops looked like for single hyphen domains: 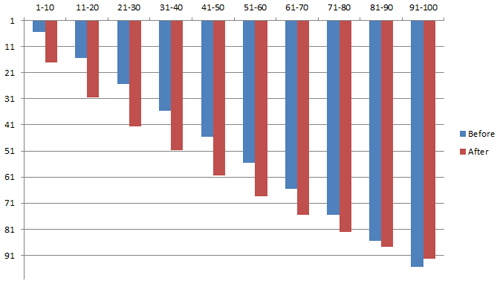 A pretty linear pattern with those results on pages 1-4 likely to have experienced the biggest percentage drops. This is fairly similar to the PMD drops we saw last time, which would make sense seeing as many of those were also hyphenated. 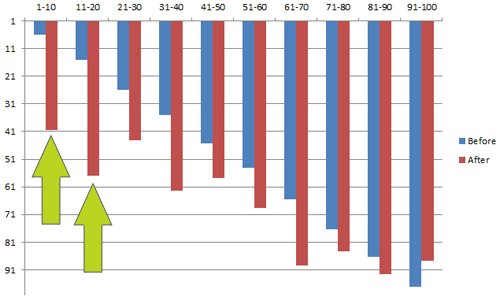 Eek! huge drops for those domains previously ranking in the top 20, and still massive movement for those between 20-40.

I won’t mention the domain as we’re still running the test, but we had a site with two-hyphen domain that was ranking very nicely for a bunch of keywords in it’s market prior to the EMD update. This was not some crappy thin affiliate site, it’s a brand selling a physical product with a fair amount of ‘buzz’ around it. The domain itself is the brand name, but it could also be classified as a PMD for one or two of its target terms. The site suffered significantly all round, and not just on those terms where it could be a PMD.

Recently, as a test, we switched the domain from brand-keyword-keyword.co.uk to brandkeyword.co.uk. Results are too fresh to share at the moment but early indications are looking pretty good. The new domain has recovered significantly, and while not quite bouncing fully back to it’s initial rankings, I think it’s a only a matter of time. I’ll update this post a bit further down the line to see if it sticks or not.

Based on this research, I would say that my gut feeling is that Google has started using hyphens in domain names as some kind of negative signal/classifier. If somebody asked me today whether to use a hyphen or not for a new venture I would definitely say look for a non-hyphenated domain. If you’re currently running on a domain with hyphens and experienced widespread drops that you can’t attribute to a Panda/Penguin slap then I would suggest you engage somebody who knows what they’re doing to dig a little deeper for you. Chances are they’ll uncover some issues that you weren’t aware of but if you can’t pinpoint any other cause then, who knows, it just might be your domain name.

And finally - yes this post is a little sensationalist and yes lots of these domains are likely low quality sites (I may re-run the results and factor in Moz DA at some point). But regardless, it’s some interesting data that’s clearly no edge-case and had to be shared. Try not to jump to any rash decisions. 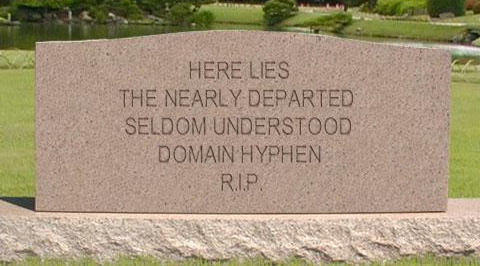 21 thoughts on “Hyphens In Domains - Negative Signal to Google?”