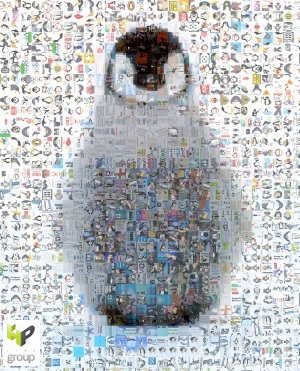 It has been a year since Google introduced one of the most significant updates the SEO industry has seen in recent years, the fact that Penguin is often synonymous sinking websites and ruthlessly hunting web spam, rather than being a cute black and white animal (somewhat similar to what they’ve done with the reputation of Pandas).

Looking back over the year of Penguin we here at High Position have compiled a short list of key facts surrounding Penguin’s release to see how it has impacted webmasters and the world of SEO in the short time since its birth.

Oh and those who have come for the cake will be disappointed  if you’re looking for the survey though - keep reading, because you’re in luck!

Penguin isn’t the only penalty you may have been hit by:

Check in Google Analytics and see if you can establish a date for those drops - this will give some more insight if it relates to a Penguin update/refresh.

Unlike Google’s Panda Release, Penguin’s public unveilings were few and far between:

Whilst Penguin has been a word synonymous with fear throughout the world of SEO the level of change within search (as identified by Google) has been far less significant than Panda whose introduction saw an 11.8% (US-EN) change and settled at a rough average of 1%-2% change in the 24 updates which followed.

Do you agree with the sentiment that Penguin’s Impact has been less significant than Panda’s?

3) Anchors Weighing You Down?

One of Penguin’s biggest shifts was in the focus on anchor text used in the links you build back to your site. A high proportion of exact match or targeted keywords appears highly manipulative and is one element sure to get you into trouble with Penguin - or worse, the Google webspam team.

One of the more common approaches to anchor text now is in the adoption of the 7:3 ratio - 70% non-targeted anchors (i.e. branding, URL, “click here” etc and 30% targeted, exact/partial match terms.)

These anchor text proportions are only a rough guide and can differ from industry to industry - have your sites survived with a potentially manipulative distribution of anchor text or have you found it to be stricter?

With Penguin came the emphasis on expanding your linking footprint, on shifting the focus towards a diverse range of links from different sources. Whilst directories, social bookmarks, blog comments and other low quality linking methods do not have the significance they once did, they are often an expected part of a backlink profile. Focusing on these methods of link building is ill advised, but they can be part of a natural linking profile.

One of the most high profile examples of Penguin wreaking havoc on high profile, strong authority sites is WPMU.org (a WordPress tutorials site, currently DA 81) coming tumbling out of search in April 2012:

This was a palpable and clear example of Google taking action on the huge volumes of sitewide links the website had acquired (because of the link in its themes) and more specifically its use of anchor text. I won’t go into the detail here (but you can read more about it on SEOmoz), but essentially a recovery was made because of removal or alteration of >500,000 links in their profile - this is an extreme case, but it’s clear evidence that sitewide links need to be used now with extreme caution!

The issue of negative SEO is not a new one, however, since Penguin it has become one of the major talking points and potential worries of webmasters. Google have always been relatively cagey about this possibility, but since the release of Penguin we have strong reason to believe the risk of negative SEO has increased. But instead of dwelling on some of the horror stories which have circulated since, Google’s own words paint a worrying picture (as highlighted by Julia Logan).

In Google’s own webmaster help “Can Competitors Harm Ranking?” they have changed the following:

From saying it’s almost impossible to they work to ensure it doesn’t happen is a telling shift in Google’s standpoint and is a clear indication that you can damage your site (or your competitors’) with bad links.

To add insult to injury Negative SEO is more effective against smaller, less established sites which don’t have years worth of linking behind them. Conversely larger brands have been much harder to attack using malicious linking because they usually have a higher proportion of quality links already.

The fear around negative SEO has meant it has gotten a lot of coverage in blogs, especially since Penguin, however, this has meant that people believe it is a far greater problem than it is. Monitoring your positions within search as well as keeping a close eye on your backlink profile is a good start if you are concerned about malicious linking attacks to your website - but remember, more often than not a drop in rankings is related to other search quality issues.

7) The Quality of a Link

Link building has been on the shift from sheer quantity for a while now, but post-penguin this has never been more true.

A simple way of thinking about this is imagine that you have £1 and at one point you could use this to buy 100 1p links, they would have had more value than buying 3 33p links or even 1 £1 link. Now, however, those 100 links are going to be worth next to nothing, yet spending that £1 on just one, high quality link, will be much, much more worthwhile.*

*Don’t buy links in the literal sense - invest in your content and you will earn that juicy link!

8) Is Penguin Getting Stricter In Its Old Age?

For those who felt the sting of Penguin’s slap in 2012 you would be forgiven for thinking that things were pretty strict/unfair, however, since research seems to suggest that the black and white menace has become less tolerant!

Whilst it seems like a suspicious linking profile of 80% or more was required to spark off Penguin it seems like anything around 50% could in fact produce some issues. Read more about this here.

9) Unfair on the Little Guys?

The thought that Penguin (and the other algorithm updates in fact) give unfair advantages on big brands is nothing new. Google disputes this and has recently tried making example of UK florist brand Interflora to show that it does not take kindly to overly manipulative linking practice, even from the big guys. This action was greeted with a great degree of skepticism from the SEO world, however, their penalty was lifted within 11 days, which stands in stark contrast to other reports of reconsideration requests taking months to be accepted. Truth is Google needs to have big brands visible as much as the brands need it, so there will always be an uneasy relationship here.

How do the little guys fight back? Find unique selling points, offer value above and beyond the product you’re selling and most of all make relationships with your peers and customers and engage with them where possible.

Whilst we’ve only seen 3 confirmed Penguin updates in the last year, Matt Cutts (Google webspam Führer) speaking at SMX in March strongly suggested that there is another iteration of the little beast in the works. Whilst we do not know exactly what will change we can be confident that the quality of links and the websites they’re placed on will again come under scrutiny - so strong content, building relationships and finding great opportunities to build links organically through substance and quality is key.

But what do you think though? Looking back over the last year of Penguin updates what have been your biggest observations? What do you think the future holds? Is this going to be a happy birthday, or a resentful one? We’d love to hear your thoughts in our Penguin study here.