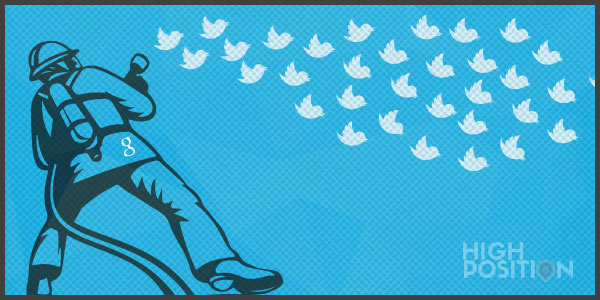 Another day, another Google algo update. The latest one dropped on Thursday causing the usual hysteria, rumour and conjecture, including Algoroo and Dan Petrovic temporarily christening the update ‘Google Starbucks’.

Barry Schwartz was first on the crime scene as ever - like Jake Gyllenhaal in the excellent Nightcrawler - unsure if it was a Panda or Penguin update (it was neither), but first hitting the UK overnight. High Position is currently monitoring the situation using intalyse ranking data.

Story of the week has to be Twitter allowing Google access to their firehose. The micro-blogging phenomenon pulled Google’s access back in 2011, but have now performed a u-turn, almost certainly down to commercial reasons and because of the early success of Twitter ads. It’ll certainly be interesting to see how Google uses tweets in SERPs compared to their previous efforts in 2009-11.

Artists’ impression of what really went down between Google and Twitter

If there wasn’t proof enough that content marketing is here to stay, Taboola has just received a substantial amount of financial backing from the likes of media giants, Conde Nast group to the tune of $117m. Could there be an IPO around the corner? Paid content marketing is big business that will only get bigger, and with so much content out there, now more than ever is the time to complement blog and editorial content with interactive, engaging content that makes you stand out from the crowd!

Talking of Content Strategy, Backlinko released an interesting and informative study, including some excellent tips, well worth looking at.

Finally, just when you thought Mark Zuckerberg couldn’t be more, well, Mark Zuckerberg, he’s gone and bought a huge plot of Silicon Valley to build Facebook Town. That’s right, although no plans to turn into a theme park just yet, it’s initially proposed to accommodate all Facebook employees, an arcade of shops and a hotel. There are unsubstantiated reports that the Winkelvoss Twins are to cut the ribbon when the town opens.

Think we’ve missed something here or have some news for next week’s Digest? Tweet @highpositionseo with the hashtag #DigitalDigest or let us know in the comments below!